Posted on January 1, 2018 by brucelarochelle 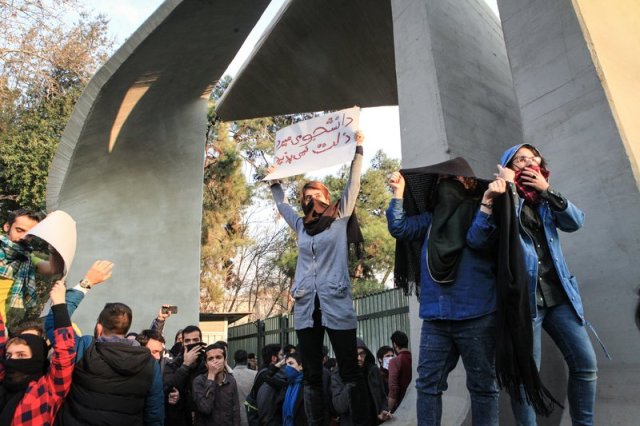 People gather to protest over high cost of living in Tehran, Iran on December 30, 2017.
(Photo by Stringer/Anadolu Agency/Getty Images)
From “Donald Trump Ups Show of Support for Economic Protests in Iran“
Associated Press, via Time Magazine

Rouhani has acknowledged that Iranians have the right to protest legally but urged national unity Monday as “the first and most important step at this stage.”

Not good enough, for certain external interests, it seems. So the mob rule gets favoured, as in Egypt, as in Ukraine, when democracy isn’t getting the result that external interests would prefer, despite professing support for democratic outcomes.

In a democracy, one may freely demonstrate, though typically one must obtain a permit to demonstrate, to ensure that there is sufficient security to address demonstrations that are no longer peaceful. If there were to be spontaneous demonstrations in Canada or the United Staes, similar to those in Iran, Egypt and Ukraine, how would authorities react?

http://www.lmslawyers.com/bruce-la-rochelle
View all posts by brucelarochelle →
This entry was posted in Democracy, Egypt, Iran, Ukraine. Bookmark the permalink.